Valentine’s Day, the holiday that celebrates sex and love, is right around the corner and so, the Student Health Center is urging students to practice safe sex and get tested for STIs.

There is an average of 1,150 sexual health related visits per academic year. Director of Student Health Services, Kristina Benkeser, encourages students to further utilize the services and hopes to see this number increase in the future.

Regardless of whether symptoms are present or not, Benkeser advises students to get routinely tested for STIs.

Coordinator of Health Promotion, Vanessa Vought, said around 50% of all STIs in the United States are contracted by people between the ages of 15 and 24.

“Most of these STIs cause absolutely zero symptoms early in the game when they are easily treated,” Benkeser said, “so, if you’re having sex, come on in and get tested.”

STI testing is available to students at any time. Benkeser said the process is simple.

“It used to be quite archaic and brutal, but that is not the case anymore,” Benkeser said. “Most of the time, we can collect samples off of a urine specimen.”

Students can always bring a friend if that makes them feel more comfortable with the experience.

Benkeser wanted students to know that they have the option to bill these charges to their insurance, but, ultimately, a receipt will be sent home.

“We offer [these services] at a reduced cost so that students can keep those parts of their lives private,” Benkeser said, “keep private parts as private parts.”

HPV is preventable with a vaccine, and untreated Chlamydia can lead to long term fertility problems.

“We do not want to limit anyone’s option later on, should they want to pursue a pregnancy,” Benkeser said.

A common misconception is that if the woman is taking a contraceptive, there is no need to use a condom during sex. Contraceptives do not limit either partner’s exposure to STIs.

Benkeser said the same thing applies for same sex couples. Although risk of pregnancy is not a concern in this case, same sex partners should still use condoms to prevent STIs.

The Student Health Center also offers counseling to students who have STIs and otherwise.

“Students are so busy here with their academic focus, and there is nothing like an STI to derail your thinking and interfere with studying,” Benkeser said. “It’s not like being told your shoe is untied.”

Vought offers appointments for students interested in contraceptives, and it is required of students who have never been on birth control.

Vought supervises Healthy Outreach through Peer Education (H.O.P.E.), a group of students who are trained and employed by Student Health Services.

Vought said H.O.P.E. is a big part of informing students of the basics of sexual health and preventing pregnancy and STIs. 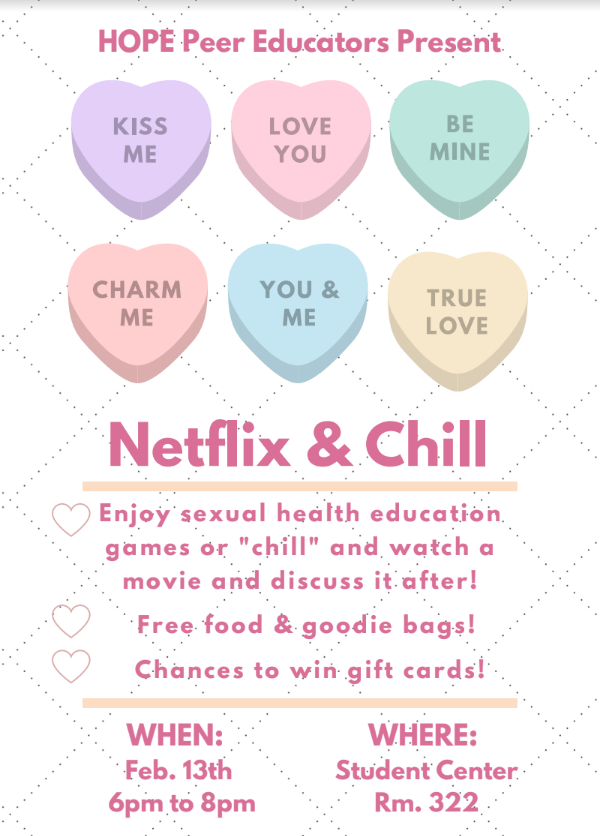 H.O.P.E. is also hosting an event in SSC 322 at 6 p.m. on Feb. 13 called Netflix and Chill where students will watch “To All The Boys I’ve Loved Before” and discuss the topics afterward. There will also be prizes and food at the event.

Vought said she doesn’t want students to be uncomfortable talking about sex or STIs.

“Most people are sexually active by the time they get to college,” Vought said, “which is why we try to reach out to freshman to do education and connect them with resources as soon as they get here to let them know that they can reach out without shame or stigma.”

Benkeser said all resources are easily accessible right in the Student Health Center and hopes students will take advantage of the sexual health resources available. Above all, she encourages students to follow the three basics.

“Use condoms, wash your hands, and get a flu shot,” Benkeser said.