As part of SRU’s “Rock the Weekend” series, the Office for Student Engagement and Leadership and the Musical Theatre Society (MTS) teamed up to host Mission IMPROVable, an improvisational comedy show featuring Agents Destroyer, Suave, Honeypot and Security Blanket.

The Smith Student Center Ballroom was filled with laughs Saturday night when the Agents performed a romantic airport scene a la “Weekend at Bernie’s,” rapped their way through a bar mitzvah and stole Brody McKenna, vice president of MTS, from Fort Knox. The interactive comedy show brought students into the spotlight, like McKenna becoming both a brother obsessed with Vine and a king with a dragon-slaying knight and freshman TJ Mull singing and dancing to “Milkshake” by Kelis.

Other events in the “Rock the Weekend” series can be found on CORE and on SRU’s website. 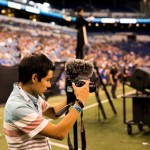 Rock Around the Rock: Valentine’s Edition A Discussion : Not only ‘No’